After my first positive and improvised experience of “sharing my business skills for a bed” at the Casa Morada Hostel in Cadiz, here I arrive now in my new favourtie spanish city, Granada. I’ll stay at The Polaroid Siesta Hostel where Pepe and its team will warmly welcome me. Ready to follow me on a trip to Granada?!

Hitchhiking from Cadiz to Granada 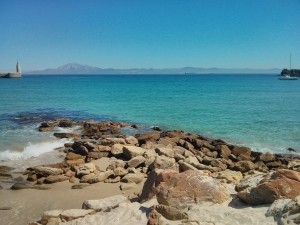 Monday morning, I leave Cádiz and catch a bus to a small town near the coast that someone recommended me for its special atmosphere, due to all of its white houses: Conil de la Frontera. It feels like being in Morocco but quieter… the town is dead, could it be due to the season, the time? I go for a walk and continue my way, this time hitchhiking.

I had been told that hitchhiking wasn’t worth it, because it doesn’t work well in Spain and the car sharing website BlaBlaCar works great. Yes, but … beyond the financial aspect, I find hitchhiking a nice thing to do, specially when the weather is nice, plus I have a beautiful day and time ahead, I go from village to village … and yes, carpooling (or bus), the primary thing about hitchhiking is freedom, freedom to stop and to be back on the road whenever you want, and all these with the opportunity to speak a bit of spanish with local people and share life moments. Plus, choosing a strategic place armed with a big smile, a little daring and patience (up to 20 minutes of waiting time) at the end it always works. Well, I must also confess that being a young girl certainly helps a bit … people sympathize more easily and it’s possible that they distrust less than usual (speaking of hitchhiking, I recommend you a book: “Le Monde en Stop” de Ludovic Hubler, I loved it, thanks mom for the gift!)

Next stop: Tarifa, and the Moroccan coasts only 14 km across the Mediterranean (unless it is still the Atlantic Ocean) Anyway, it’s awesome! Later, through the window, I spot the coveted rock that Spain would gladly recover: Gibraltar, British colony, causing great tension between the two countries. At last, I turn to Malaga, where my guest for the night, Felipe, just left his French course. A mojito on the terrace of a bar located on a cliff overlooking the sea, sunset, strolls through the streets of Malaga, long talks … 3 in the morning, time to go to bed! Another great meeting thanks to CouchSurfing, I’m really lucky! We got up at dawn, Felipe leaves for work and I’m leaving to meet my carpool appointment and an hour and a half later I’m in Granada! 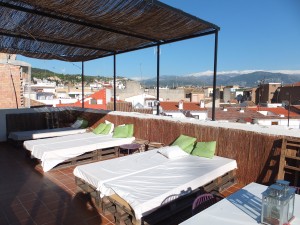 The Polaroid Siesta Hostel has 12 rooms ranging from 1 to 6 beds. Pepe, the manager began this adventure with his partner a year ago. Back then he was an architect and was working on the building renovation project. The building owner told him about his idea of renting the place for a student residence. Pepe then proposed him to make a youth hostel. After that, it was a chain reaction. Two days later he signed the lease. He had 4 months to prepare for the opening. He chose the name “Polaroid Siesta Hostel” in order to join an english word with a spanish one. Two well known words that represent the artistic and short-lived character of the traveler who is passing by (also the initials form the famous PS that we find at the end of a letter). The rest of the story was: hard work, meeting a lot of people and the eagerness to learn from the of travelers’ experiences.

This is the first time Pepe runs a business like this. He likes numbers and is curious to know more about Revenue Management and its daily use. We spent 2 or 3 hours talking about all this. I notice a difference with my last experience, my speech begins to be organised, I spend less time looking for words, some issues reappear. I have also thought about how to organise the first exchange:

2. Diagnosis: first phase of the exchange, I do a lot of questions to understand the details of his business, his market, the problems he encounters, to identify his needs, how can I help him?

4. Adapted implementation: after looking at the information, how can we adapt these basic concepts to the specifics of his business? Together we start to develop a chart in Excel that may become a tool to aid the decision making process. The purpose of this tool is to optimize his pricing strategy, with the figures of the evolution of bookings for days and months ahead.

Making an exchange in only to 2 or 3 hours is a bit of a shame. I have the impression that I’m only scratching the surface of the matter. I tell myself that in the future it will be better to have at least 2 exchanges, to allow time for considerations and the following day answer the questions that have come into perspective (to sleep on it!). In any case, the results are very positive, Pepe is happy (he will email me in the next couple of days to confirm and to thank me again), and more of the same, I have learned from the exchanges and time has flown! I truly love sharing my knowledge and pondering on studies and how to apply them!

Granada, the city with the big “A”s 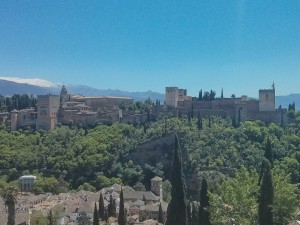 Some words about Granada to finish with:

Albayzín: the network of streets of its ancient and captivating city resting on a hill, an exceptional view of the Alhambra, Sacromonte caves and its hippie / gypsy people.

Alhambra: the Spanish-Moorish-Islamic fortress and its magnificent gardens and palaces. But do not forget to book your tickets in advance (I didn’t have the chance to visit it because it was fully booked for the following 15 days!)

Altitude: the white mountains of Sierra Nevada and its skiing areas, the most southerly in Europe (just 30km from Granada), with a peak between 2,100 and 3,300 mts has hundreds of miles of tracks.

In love (“Amoureuse” in French)! An adjective that sums up my overall feeling towards Granada. I only spent 2 days but I promise to return. Granada is the city that, in my opinion, has all the ingredients to be my favourite Spanish cocktail: the mountains and the sea 1 hour away, an ancient city with a maze of streets resting on a hill, a lovely stream at the bottom, all under the eye of the overwhelming Alhambra and with the sound of the Andalusian guitars in the background, I love it!